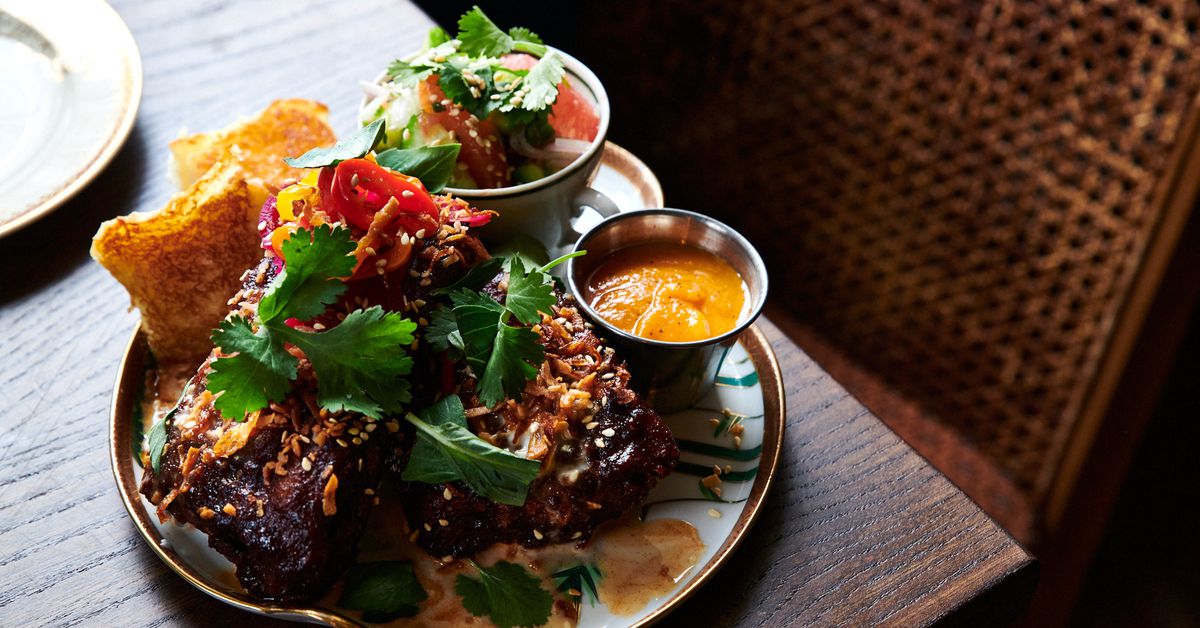 Of course, Portland isn’t perfect. Its bureaucratic structure receives and absorbs a constant stream of critiques, from both sides of the politically divergent public. The pandemic has slowed the typical turnaround time for licenses and, in particular, construction permits; it has made running or opening a restaurant anywhere exceptionally difficult. The subsequently necessary financial relief is still lacking on every government level.

That said, the flexibility of the city’s regulatory structure for small-scale food businesses makes it easier for chefs to test new ideas and respond quickly to the unexpected, like a pandemic. When COVID-19 shut down indoor dining, Portland’s permissive regulations allowed many in the restaurant industry to quickly pivot to food carts, pop-ups, or Instagram-based virtual restaurants. Currently, Multnomah County is home to 1,093 licensed mobile food businesses. While the number of permitted restaurants in the county is still more than 4 percent below the 2019 pre-pandemic peak, the number of mobile food businesses as of January 2022 is up 13 percent since 2019. Because of the accessibility of those smaller-scale food businesses, in terms of licensing and city easements, it’s possible for chefs to try out just one niche idea and turn it into an art form — even during a crisis.

“At the time, I had no desire to open a restaurant because that just seemed way above my head,” says Jace Krause of starting his first Fried Egg I’m In Love food cart, hawking breakfast sandwiches with names like Yolko Ono. Now, eight years later, Krause owns a restaurant in Portland, along with two food carts. Krause started Fried Egg I’m In Love only after relocating to Portland from Seattle when his wife got a new job. He had basically no experience running a business when he started; if policymakers in Portland hadn’t made it so easy to start a food cart, he probably never would have pursued his dream. “I was looking into this in Seattle, and there’s definitely more hoops to jump through and more restrictions than in Portland,” Krause says.

Portland is, by far, the easiest city in the country in which to run a food truck business, according to a report published by the U.S. Chamber of Commerce Foundation in 2018. Obtaining all the permits and fees to start a mobile food business in Portland costs just $1,877 compared to $6,211 in Seattle, which would have been more than half of Jace’s startup budget. Researchers estimate that the annual cost of staying in compliance with local laws is about $5,410 in Portland; in Seattle, it’s $32,076.

In addition, there are few restrictions on when, where, and how they can operate. In Portland, food carts can remain permanently on almost any commercially zoned parking lot. While cities like Boston and Baltimore prohibit food trucks operating within 100 or 300 feet of a competing establishment, Portland has no such rule. This freedom allows for the creation of food cart pods all over the city, a collection of food carts all renting the same space. They can be as simple as a few carts in a small parking lot or a large outdoor space with tables, firepits, play areas for kids, and covered patios with food from a dozen different carts.

“In Portland, you can just park your cart somewhere, and it can just be in one spot, and in a lot of cities, that’s just not the case,” Krause says. “So, I think that alone is kind of like the main reason Portland has such a vibrant food cart culture — you can have a set location.” This type of arrangement was basically not possible in Seattle, due to rules that require food trucks to move frequently and use a commissary kitchen.

Food pods make it possible to establish a consistent slate of regulars and can make starting a food cart even easier; they create a single destination for diners, behaving something like an open-air food hall. But beyond the built-in customer base, food cart pods also offer a number of practical amenities that are crucial for food cart businesses.

“You get to meet a lot of great people, other food trucks,” says Tryzen Patricio, who started his first Hawaiian food cart, GrindWitTryz, right out of college in 2019 with the help of his family. “You have gas right there, you have sewage and water. Everything’s in that pod. All you need to do is bring your truck and hook it up, which is super convenient.”

Like Patricio, Jessie Aron — chef and co-owner of eclectic comfort food restaurant Malka — got started in the food cart world early, at the age of 21. “In retrospect, starting the food cart was a dream,” she says. While actually running a successful food cart was incredibly demanding, getting the business paperwork approved, in her memory, “was so, so easy.”

“I was really young and did not know what I was doing,” she says. “I remember only having to go to a permit office twice and filling out very minimal paperwork. It was nothing, really.”

Aron managed to start Carte Blanche in a 1964 Airstream for roughly $40,000 all told, while Krause started Fried Egg I’m In Love for just $10,000 by getting a rent-to-own deal on an existing cart. In New York City starting a food truck is expected to cost around $100,000. Portland’s lower barrier to entry means many more people can try to start a food business and can try niche ideas. A study from 2008 found 51 percent of food cart vendors in Portland were born outside of the United States and more than half of cart owners wanted to eventually move into a storefront location. For example, Nong Poonsukwattana moved to Portland from Thailand and started a food cart that just served chicken and rice, Nong’s Khao Man Gai. It has since expanded to a very successful set of restaurants.

The same is true — perhaps even more so — for pop-ups. When it comes to pop-up permitting, Portland charges only a $35 fee for a temporary liquor license. Now that she has her own restaurant space, Aron lets her staff host pop-ups there on days that Malka is closed. One of her chefs is hoping to start an Italian restaurant one day, so the restaurant hosted a pop-up at the location to test out some food concepts. Thanks to lenient rules around food carts, “it is possible here to just start small and grow a reputation,” according to Aron. “Establish yourself and then expand. There is so much precedent for that here.”

Gado Gado, the sophisticated Hollywood Indonesian restaurant, is a prime example of a pop-up-to-restaurant success story. Thomas and Mariah Pisha-Duffly first tried out the idea for their pop-up in 2017, adapted from their Family Feast dinner series in New England. The success of the pop-up eventually allowed them to move into a permanent storefront in 2019. When the pandemic hit, the team again turned to the idea of a pop-up, using the Gado Gado space to launch Oma’s Takeaway, “Asian stoner food” designed to travel well. The pop-up proved so popular it morphed into Oma’s Hideaway, a permanent restaurant on Division Street that Eater named one of the best new restaurants in America in 2021.

Alcohol sales often make up a significant share of restaurants’ revenue — 20 to 25 percent, on average, for those who can sell booze. As the fight for to-go cocktail legislation illustrated, it can be the difference between a profitable business and bankruptcy. And in Oregon, it is relatively inexpensive for restaurants, food carts, and even temporary pop-ups to sell beer and wine.

“It’s insanely cheap, just $800 [for a restaurant] to get a liquor license,” according to Bryant Haley, a spokesperson for the Oregon Liquor and Cannabis Commission. The price only went up to $800 in 2019 after being a mere $400 for 70 years; in comparison, states like Washington charge upward of $2,000 for a full liquor license for restaurants. It is also even possible for food carts in Portland to get a license as long as people drink within the pod, which can be a major source of revenue.

Importantly, both the state and the city have few additional restrictions that make getting a license cost significantly more than the basic fee. The OLCC actively tries to make sure qualified applicants complete the steps and get their licenses within 90 days. According to Patricio, “It was a long process, but our [OLCC] agent, really, was on it, and they kept on reminding us what we needed to do to get our license in time.”

Tom Amick moved to Portland from Pennsylvania; his adult daughter lives in an apartment next to an empty alley parking lot off Southeast Division. The family reached a deal with the landlord to turn the small, unused commercial alley into a food cart pod, now a beautiful outdoor community space to share coffee, beer on tap, and cheesesteaks, called Moore Food & Co. Although Moore Food & Co. is an homage to East Coast standards like pork roll and cheesesteaks, Amick has zero interest in doing something similar in his home state.

“I wouldn’t even consider it, I know that there is no way,” he says. “The [liquor] licensing and fees [in Oregon] are dirt cheap. It’s great. My liquor license cost $800, and where I was at in Bucks County, it is like a million dollars for a liquor license … There’s only X amount allowed per county, and you can only get one if a restaurant sells it, and that’s it.”

Pennsylvania, like a dozen other states, has a quota system limiting the number of licenses it issues, forcing people who want to start restaurants that serve drinks to spend big to buy a license from an existing holder. These secondary-market licenses can run in the hundreds of thousands of dollars. It is one of the more dramatic examples of how regulations can heavily favor certain businesses or stifle competition.

Portland’s light hand with licensing regulation is combined with a heavy hand in urban planning. In 1973, Oregon was the first state to adopt urban growth boundaries to limit sprawl, protecting forests and farmland near cities. Portland is one of only a few American cities with this regulation. “We’re able to get beautiful produce that is grown incredibly close by. We can, as chefs, tour the farms and that’s always really fun to just see where the food is grown,” Aron says. “We have personal relationships with people growing our food, and that feels really good.”

Portland’s chefs, food cart owners, and pop-up cooks are resilient. It’s a city to which a Thai immigrant can move with $70 dollars in her pocket, and open a food cart so successful it becomes a local phenomenon. When an incoming development displaces a Portland food cart pod, the community fights tooth and nail to make sure they can land in a pod better than where they were before. Even in the most inhospitable conditions, chefs here have opened a number of groundbreaking new food businesses: a vegan Vietnamese cafe, a celebrated Cuban pop-up, a worker-owned cooperative selling Sri Lankan food, a restaurant specializing in Oregon-foraged produce and local game.

Not every creative food business succeeds, but the low cost to entry means more people can experiment, afford to try again when something fails, or make a hard pivot to stay afloat. The future of the food industry around the country is uncertain; whatever comes next, however, may start here, for the simple reason the city makes it easy to try and less punishing to fail.