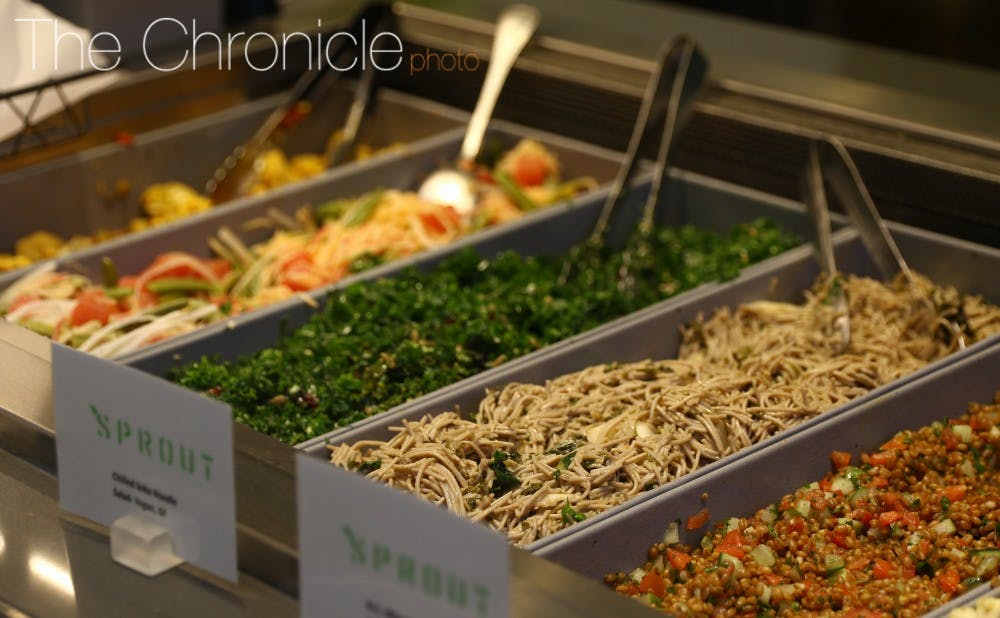 
Duke students may be apart physically, but they’re still connecting in the kitchen. For many, quarantine comes with extended free time, and some students have devoted it to recreating the dishes they miss most from Duke’s eateries. “Cooks in Quarantine” is a Facebook group where Duke students share what they’ve been up to in the kitchen. Many participants are preparing dishes inspired by their favorite Duke meals.

“We were all going through this shared and crazy experience. Cooking was one of the outlets to feel like we were still a community at Duke,” said senior Shreyas Gupta, one of the founders of the “Cooks in Quarantine” Facebook group.

Gupta and his friends created the group in March as a way to occupy themselves and share recipes between friends. The group began as 15-20 friends and has since grown to over 300 students, and while the group began with seniors, it has since grown to include much more of the Duke community. Gupta noted that the group has brought down some of the social boundaries on Duke’s campus by allowing students to connect over the shared interest of food.

“There aren’t a ton of opportunities for students to branch out beyond their social groups” Gupta said. “We get to know each other through cooking.”

While the admins do not heavily curate the posts on the page, Gupta noted that they act to ensure the group remains body positive, such as making sure that no posts include calorie counts.

“We want it to be a stress-free environment. Duke is such a stressful time, and this is an especially stressful time, so this is something people can do to relax and not think about everything,” Gupta said. “Whether or not you have cooked before, this is a fun outlet for people to feel like they’re still a part of Duke even though we’re all at home.”

The following recipes are recreations of campus delicacies like Divinity Café’s Baked Oatmeal, Sprout’s Chickpea Stew and Sázon’s Quesadillas, as well as thoughts from the student chefs from the “Cooks in Quarantine” Facebook page.

Senior Parsa Hoghooghi recreated Divinity Café oatmeal, a morning staple for many Duke students. He found the recipe in another facebook group, “All Duke,” and made adjustments to make it more like the “Div Caf” recipe, such as adding caramelized green apples to mimic the apple sauce used in cooking.

“The baked oatmeal is a comfort food. If it’s a rainy day or you’re bored with online classes it’s nice to make something that makes you feel back on campus,” Hoghooghi said.

He expressed gratitude that Gupta and the other founders took initiative to create the group. “The admins made the group bring a piece of Duke back into our lives during quarantine. Food is a community building thing,” Hoghooghi said.

Subscribe to our weekly email about what’s trending at Duke

In a large bowl, mix all of the ingredients together until they are incorporated. Spread evenly in a baking dish with around a two inch thickness, and bake for approximately 40 minutes.

Serve with either milk or cream.

Senior Sayle Evarts joined the group in late March after Gupta, a member of her tenting group, created it. While she did not typically cook as a hobby before quarantine, Evarts has been using the time to slow down, cook, and watch Bon Appetit videos.

“Right after Duke went online, I was feeling a lot of Duke nostalgia,” she said. “Cooking became a comforting thing, and this group is a good example of how social media can enhance that in a time we can’t be together physically.”

While not vegan or vegetarian, Evarts loves Sprout and recreated the chickpea stew by adapting a New York Times recipe to remember one of her favorite lunch dishes. She noted that, having celiac disease, she enjoys that Sprout is careful about cross-contamination. She feels the Facebook group has helped her feel involved in the Duke community while separated.

“It helped me personally,” Evarts said. “Lots of people reached out to me and sent pictures of their recreations of the chickpea stew. It’s a good way to stay connected.”

1 can of full fat coconut milk

1 to 2 cans of chickpeas

Any veggies that taste good soft

In a saucepan, heat a hearty amount of olive oil over medium heat. When oil is simmering, add chopped onion with salt and stir until softened. Add peeled and minced garlic, turmeric powder/real turmeric, ginger and a rinsed and drained can of chickpeas. Stir and cook for 5-7 min.

Reduce the stew to a simmer and cover for another 20-25 minutes. Add a little lime juice and salt.

“Sazón is a staple at Duke and in my life and I really miss it, so I thought I would be able to bring it home,” she said.

While Heit had some cooking experience before quarantine because her family owns a restaurant, she has been trying new recipes in her free time. Like many students, she is hoping to further develop her cooking skills to bring back to campus once quarantine is over.

“I think the group is an awesome way to stay connected and share the taste of happiness we can discover when we’re apart,” Heit said.

Your choice of sautéed vegetables

Note: The instructions in the recipes are copied and edited for clarity from the original posts in the Facebook group.

Paige Carlisle is a Trinity senior and a staff reporter for The Chronicle.